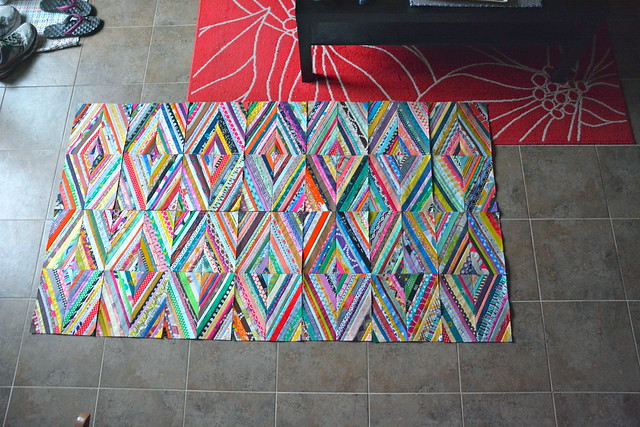 A few months ago, I got an itch to make some string diamonds, after seeing this instagram post by Ramonarose.

Strings are always fun to work with, and I happen to have an abundance of them. It's funny how that happens. And after fourteen full blocks (which is 56 rectangles worth), a dent has not been made.

That's okay! There are more blocks to make, and this has me itching to make another string project when I finish the diamonds. I love them! Each rectangle (quarter block) is 10.5" x 5.5" unfinished, and most strings are 1.25" or less wide. There are a few wider strings for variety. 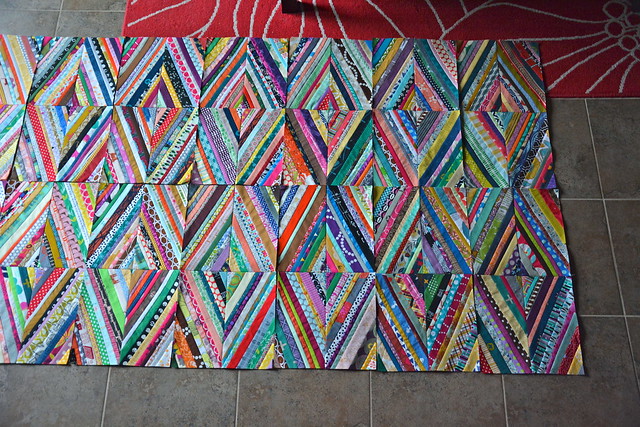 It's so colorful and it makes me happy every time I make a block (or more realistically, a stack of blocks). 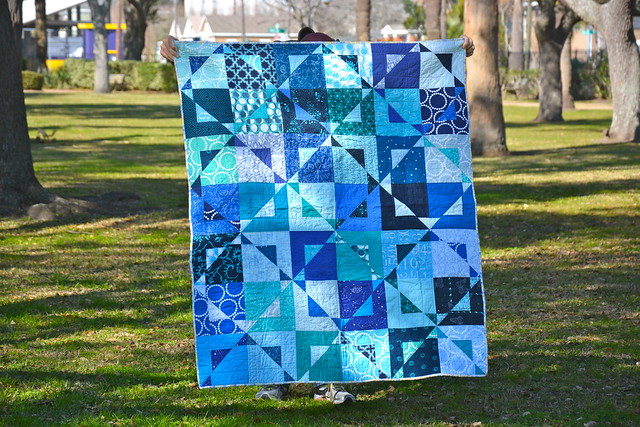 This quilt is completely because of my pal Charlotte (who is now on The Great British Sewing Bee!!!). After seeing this on instagram, I knew I had to make a nearly identical version. Blue is my most-represented stash color, and come on, it's lovely! 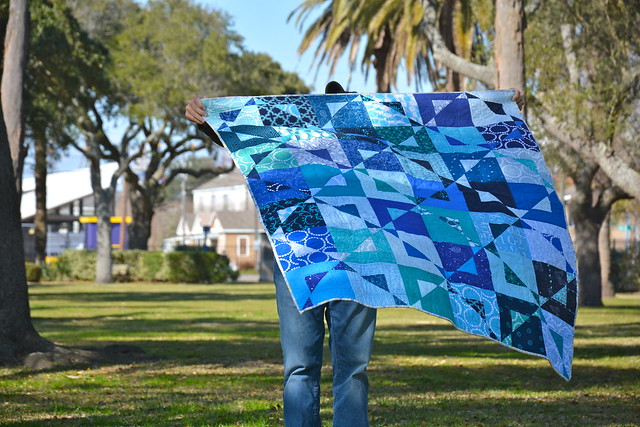 Aneela's pattern is fun and sewed up quickly!

It has become one of my favorite quilts, and I love the way it looks on our new quilt ladder.

I took so long to blog this finish that I have started a second version! 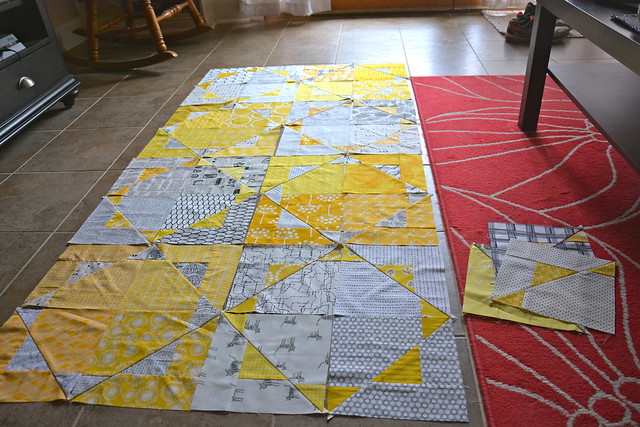 It was fun to choose a variety of yellow prints for this version. This is a great scrappy pattern! 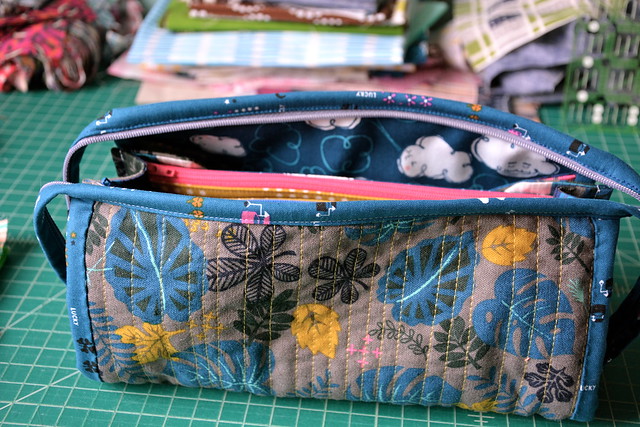 A few years ago at the Stash Bash, my pal Amanda was kind enough to work on some Sew Together Bags that I cut out. In truth, she did most of the tricky sewing, and left me with a mostly assembled bag to finish.

Earlier this year, I decided to stitch up one on my own, and give it to her as a (very late) thank you. 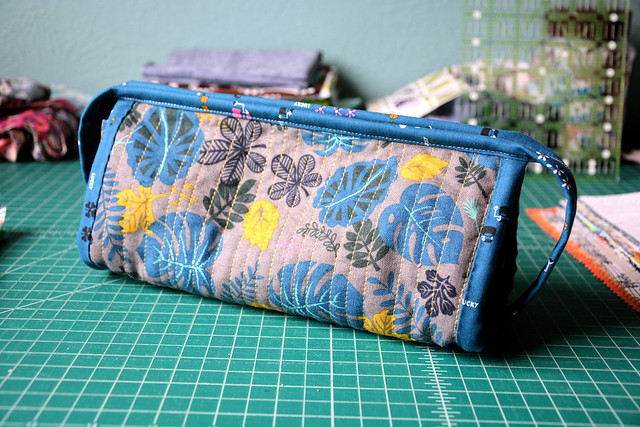 I love the way it turned out. I picked colors that I know she loves (and I do, too!). 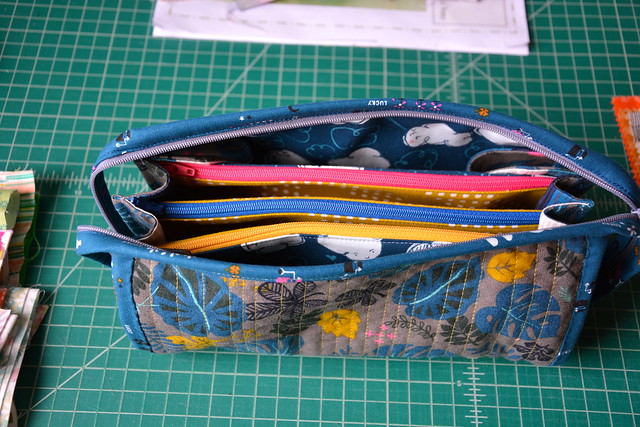 I especially love the yellow quilting! 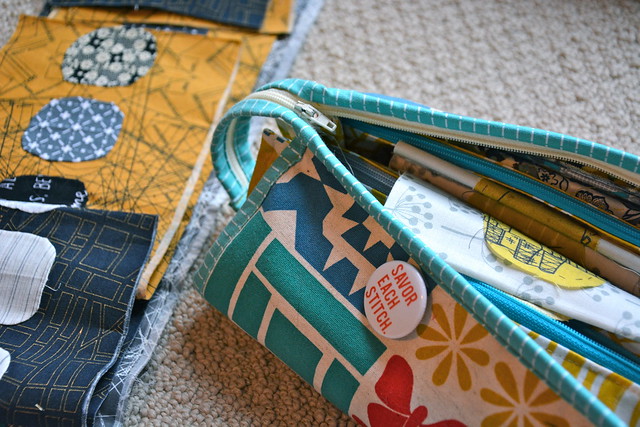 Here is a shot of the one Amanda (mostly) sewed for me. I use it to house my in-progress aerial grove quilt. And speaking of, I hope to make some progress on this quilt on an upcoming trip!

We spent three days in Yosemite last month, and I hope it won't be my last visit.

We saw waterfalls (which made me squeal), lots of elevation changes, a mountain lion! (no photographic evidence - we were all too shocked to take a photo, but we were in the car when it happened, so we were safe), huge trees, and amazing skies.

We hiked through Toulumne Grove and walked through this huge Sequoia.

It was incredible to be in such a place, and I don't think that feeling will fade.

Sadly, I only tried two new recipes in April. This is mostly because we went on vacation, so it's not too sad! 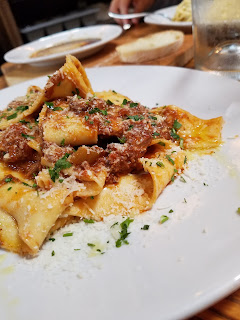 This was the lamb ragu with papardelle we devoured at il vecchio, in Pacific Grove, California.

The two recipes we tried were total winners (one of which we made like, four times already...)!

The two we tried last month were both from the Skinnytaste cookbook.

-Broccoli mac and cheese
We substituted 2% milk for the skim. I cannot bring myself to use skim milk. I also added some paprika, garlic powder and ground mustard, as well as roasting the broccoli (instead of boiling it) for a little more flavor.

-sesame roasted green beans
Um, YES. This is the recipe we keep making and devouring. The sesame oil with green bean combo is just the happiest. Why don't I use sesame oil more often??

Other good news: we have already tried three recipes this month, so I hope to have a nice long list of recommendations when the month is over!
This has been a great exercise, and so far this year, we have tried TWENTY new recipes, many of which are from cookbooks that have sat on my shelf for years.

Up next, some Yosemite photos! 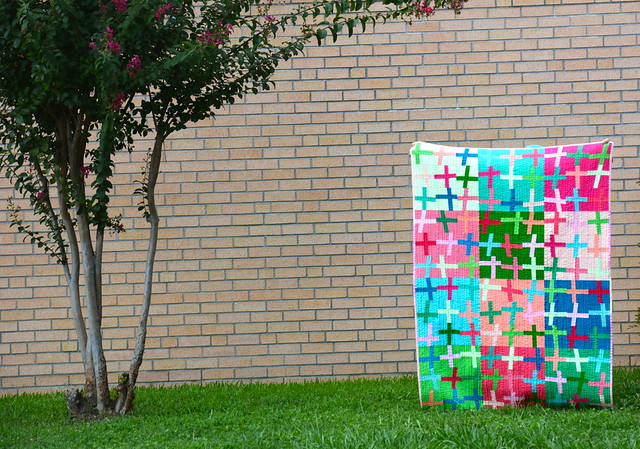 Last year, I made a solids bundle for Stash Fabrics (she is still offering the bundle here, if you like!).

I shared the quilt top back in, oh wow. July! I somehow forgot to share the finished quilt, but good news! 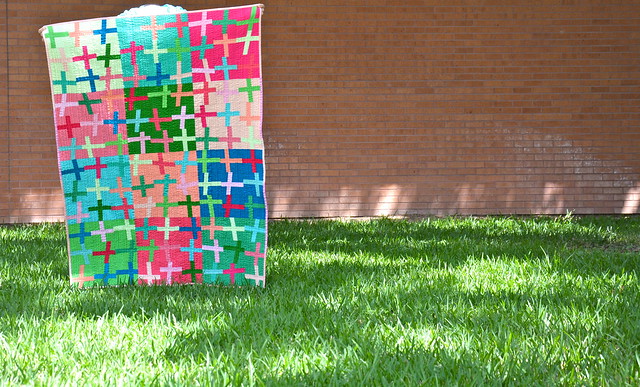 You can get a free pattern for it over at Robert Kaufman. 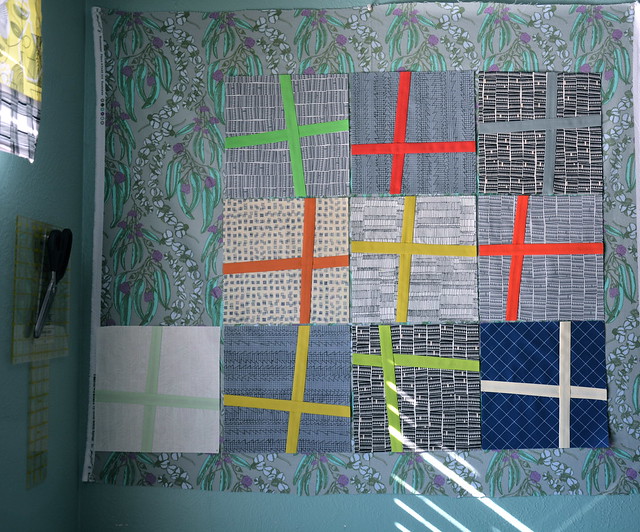 I've been working on another version, using large blocks (a Doe layer cake, to be exact) and some Kona strips.

I hope this one will be an FO before the end of the year!