And while we're on the subject,

How about a do.Good Stitches update?
We have been making some pretty fun blocks in the Love circle lately.
I'm not sure when I last posted about the group, but last month, we made house blocks for Natalie.

In a paper-piecing mood, I first made this block. Whoa. Let me tell you, it is not for the faint of heart. But it was fun, and I am thrilled with how it turned out! I used Charise's Cozy Chalet pattern from Fat Quarterly Issue 8.

I also made this block, using Elizabeth Hartman's Neighborhood block, from her second book.

This month, we used Rachel's tutorial for a paper-pieced striped block.

I think both quilts will be amazing!

I'm glad I finished up that Starry Quilt, because it's my month again in October! I'm planning to ask for improv curvy blocks using Penny's happy tutorial. I made a few practice blocks last night, and I'm excited to make more.
It's been awhile since I've made curvy things (my favorite was this one for Nicke.)

Isn't it lovely when you have a giveaway and then you don't show up for the opening? The winner of the Erin McMorris half yards, courtesy of FreeSpirit, is Marla!

Yay! I met Marla at the Stash Bash, and I am so happy this fabric is heading her way!

I'm also finally able to share my do.Good Stitches quilt, and it's a good thing, since next month is mine for quilting again.

I really love this quilt. I don't give purple a lot of love, but I think it works so well with yellow and gray in these stars.

I outline-quilted each star, which was worth the time it took. I then filled in larger sections (such as the strips I used to connect the blocks) with free motion quilting. I held back from doing the square quilting around each star. I didn't want to overdo it, and I think I stopped at the right point! I used a lovely gray bias stripe to bind.

My sweet husband ducked down behind the quilt in these pictures.

I am entering this in Katie's 100 Quilts for Kids. Please enter if you can! 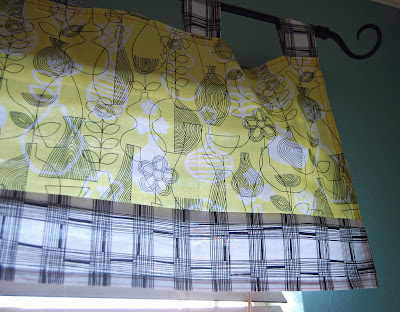 I am popping in today to share a tutorial I recently wrote for FreeSpirit, as part of National Sewing Month. You can find my cafe curtain tutorial here, over on the FreeSpirit Fabric blog.

I was able to use two prints from Erin McMorris' line, Astrid. 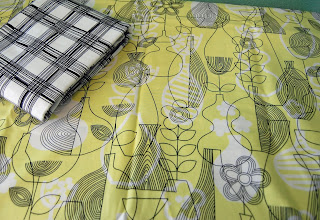 And even better, FreeSpirit was kind of enough to send me a little extra for one of you!
Just leave a comment here and you can win a half yard of each of these two Astrid prints!
Please be sure I have a way to contact you, and for this giveaway, US entries only, please!
I will pick a winner Monday!

I really like this curtain, and I hope you do, too!

ETA: Comments are now closed. Thanks!

In further pursuit of garment sewing, I recently purchased Made by Rae's lovely Geranium pattern. I've signed up for a craft show next month, and I thought this would be a good pattern for that (make sure you sign up for the license if you decide to do the same!).

I made two versions to practice, both of which have been gifted to special peeps.

First, a 12-18 month version, with gathering. This was made for my sweet little niece, Adelaide. She turns one in December, and her mom tells me it will work well for several months. I think it's always smart to sew a little big for kiddos, and hopefully, she can wear this well into spring.

Version two is for Ara Jane's Ingrid. I sent that little scalloped hat to Ara Jane for her soon-to-be-second, and this dress for the almost big sister! This version has pockets, is a 2T top (not a dress), and has pleats.

And look. The buttons. Adorable.

I plan to make a few for the craft show, but I also expect this will be a go-to baby gift.

Contrary to recent posting, I do not have babies on the brain. So don't get any ideas, mom, Nicke and Amanda. xoxo.

It is so exciting when you discover a recipe like this one.

Ara Jane made this amazing granola for the Atlanta retreat last year. It made for an amazing breakfast paired with yogurt, and I dreamed about it when I got home. But then, of course, I delayed trying it myself. No reason, really, except lack of organization, maybe?

Well, I rectified that earlier this summer, and just made a second batch.

It has so many amazing ingredients, and is really simple to make. All it takes is a little time. This time, I subbed pecans for pistachios, because I have a freezer full of them.

I encourage you to try the recipe for yourself! It makes a heap of granola, which you can share, or just enjoy for several weeks!

A little of this

It seems I'm a little obsessed with the Staple Dress pattern. I've made four versions, and I've got a fifth one cut out. It's such an easy pattern to sew, and it's very comfortable to wear. Of course, I have very little photographic proof that I wear them. So, let's take a quick chronological look at Staple Dress numbers 1-4. 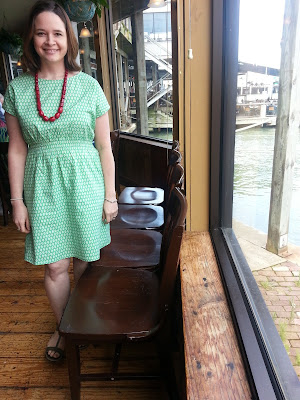 Version 1, finished in May. I followed the pattern for this one, and did five lines of waist shirring. I cut this one at a larger size than the following versions (but the later versions also had less shirring, so it balances out).

Version 2, tunic length. I used a purchased top to select the length for this version. This is my most-worn version so far. 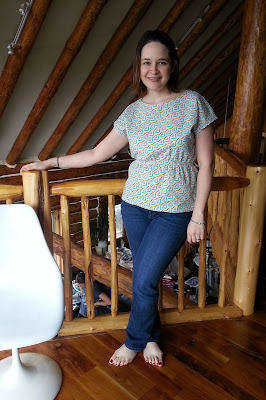 Let's all ponder what this pose is, shall we? I finished this one on the Madison retreat in June.

Version 3, finished a month ago.

Version 4, in voile and Tsuru, also finished a month ago.

I wore this one to my sister's rehearsal dinner, but I only have half shots of it. Oh well. Eventually.

The tunic and two later dresses were cut with a wider neckline, as I felt the pattern neckline is just a little too high.